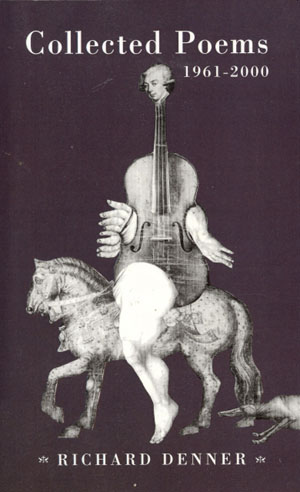 The first poem of his collected work begins with this slender proclamation: "we find / ourselves / in a new / world / speaking / an old / language." Yet, Denner finds a nascent tenderness in that old tongue that radiates equally from drama and humor.

Hugging the spine of this 500 plus page, black monolith, Denner's incantations rant, roll off the tongue and stare down the gullet of the eternal with a vengeance, and with an elegance that is no pomp and all circumstance.

Certainly the circumstances of this forty-year span of the poet's life are fertile ground enough for poetic insights. The poems are arranged chronologically and geographically, moving from Berkeley in the 1960's to Alaska to Washington to Colorado, and finally landing in Santa Rosa, California in 1998. The volume also includes the author's linoleum block prints and nude figures, rendered with a confident honesty.

The poet's voice remains remarkably secure and even throughout this stretch of time and personal evolution, as if the voice itself were already found and whole when that journey began and only the angle of perception and the depth of vision have clarified.

Denner is fond of angles, of the way light thrown on matter changes reality, alters meaning, if even for a moment. His poems spawn words that then turn 180 degrees to new meanings by association, or by the magician's slight of hand.

His poems of love are arrestingly unhampered by sentiment. His politics are sedimentary rock elevated by platonic techtonics, ideas hoisted and tossed like a salad and dressed with apple cider vinegar. Sharp and uncensored. Denner is unconcerned about appearing wise or astute, his writing is clean and playful, devoid of conceit, adroit by virtue of candor.

Denner's work brings us to "a place smaller than the heart / but bigger than the world." And if he is one of the first of his generation of poets to publish a collected work, it is perhaps because he has lived each day not once, but once again to savor its very tonic and to gain all there is of truth and beauty from the bough's sweet fruit.