"I shall tell you of things that change, new being
Out of old: since you, O Gods created
Mutable arts and gifts, give me voice
To tell the shifting story of the world..."
Ovid's Metamorphoses, Book I, Lines 1-4 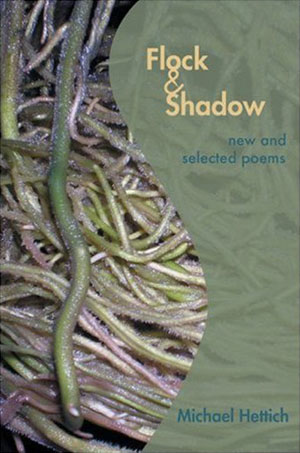 A few years ago, four to be exact, I enrolled in a creative writing course at Miami-Dade Community College (as it was called then) as a way of scratching an inner itch I had long tried to ignore. I didn't know it then, but my thirteen or so classmates and I were studying under the eyes and ears of a genuine, though covert master. I have read widely enough to think more than twice before lavishing this title upon anyone, but a careful, thorough reading of Flock & Shadow, Michael Hettich's most recent volume of collected poems, more than proves what seems to me a long overdue estimate. His new and not so new poems pulse with a casual, also precise lyricism that lift and scrutinize the beautiful, deformed, enigmatic and ordinary, a lyricism that presents them all side by side as complimentary, not mutually exclusive. In our overly cosmetic days, this willingness to value and present life "warts and all" is both inspiring and commendable.

Harold Bloom, famous and infamous high critic of our day, has written somewhere that the poems that really go deep and stand the test of time have one thing in common: weirdness. Think of poets like Donne, Blake, Dickinson, Hopkins, Stevens, and, of course, Ashbery, and weirdness of concept and presentation emerge immediately. The weirdness Bloom writes of is not merely a surface quality, but an organic principle and power inherent in the vision and/or trajectory of an artist's work that prove original when said artist's work is compared to that of his/her past or immediate peers.

This being said, Hettich, primarily a poet and teacher, has written and published what I think to be the most consistently full-visioned, open-terrained poems in Miami, poems which flash and dazzle with the original weirdness Bloom has described elsewhere. Read next to Hettich, Richard Blanco, Sandra Castillo, Ricardo Pau-Llosa, Adrian Castro, even Campbell Mc Grath, to cite some of the sometimes-recognized Miami literati, pale and vanish. The most obvious reasons: Hettich's deep, far-ranging sense of a world that is both inner and outer, plus a plainspoken subjectivity that refuses to take the moral high ground. Sit down with Flock & Shadow and you get talent unpolluted by the flashy, overly-tropefied surface nostalgia of political exile that the work of his local contemporaries, all except maybe Mc Grath, share. Hettich's whimsy and excitement, unlike theirs, are contained, diluted. None of Hettich's poems smack you in the face and run away hollering hysterically.

In two of his new poems "Some Days Just Feel Like" and "Specialist", for example, we are offered new perspectives on perhaps recognizable phenomena. The first poem treats the not tragic, though insistent feeling of delay that seems to keep some of our deepest intentions and dreams out there in the future. Hettich seems to say that our ordinary days are "free improvisations without/ melody, stories that flesh no plot,/ or books we could intend to read/ for years---until our lives are separate/ from our bodies, and we are everywhere." His "Specialist" delves into the not-expected, perhaps not fully believed-in special abilities of a doctor who can hear conversations being had in radio-noise-filled cars moving along the highway, who can distinguish the narrator's heartbeat from all others as he enters the already busy office for a visit. His poems might present weird circumstances like this one, but they are also open to unpredictable, surprising possibilities and Ovidian transformations where narrative is concerned.

Digging into the special abilities of his "specialist" beautifully, Hettich writes ".he could hear the unexplored terrain inside:/ huge fields no human had visited, with birds/ rising just above the grass,/ gliding there, landing, singing in patterns/ that always sounded new, and in harmony." These two short poems from the fifteen new ones represented in his very affordable selected oeuvre move away from, but do not mar the beauty and pain, ecology and economy, plus the sensuality and almost spiritual qualities of his previous work. Of these, poems like "Mercy, Mercy", "Colorado", "Your Mother Sings", "Romance", "First Love", "Loons", "In Miami", and "In Simple Truth" are worth reading, memorizing, even passing on to others. New or old, Hettich's poems all converse with the experiences that have shaped or continue to shape us. They affirm that life is peaceful and violent, loving and hateful, exquisite and tumultuous. These poems are true to nature, complete, lustrous, showcasing a type of verbal double-sided coin page after page. Ovidian in turns of phrase, image and narrative, they promise strangeness transfixed and transformed by a rare imaginative awareness, the genuine poetic intelligence of a true maker.

Anyone thirsting or starving for an emotive and cognitive drink or food that truly satiates, whose substance refreshes and multiplies itself in miraculous, down-to-earth, fully human ways, ought to spend some time with Michael Hettich's Flock & Shadow. This is one book that will transform both itself and its reader time after time. Eventually, too, it will prove a treasure chest of deserving-to-be-cherished poetic gems.