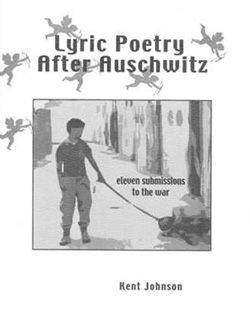 Really? A review of Kent Johnson's Effing Press chapbook Lyric Poetry After Auschwitz: Eleven Submissions to the War in the winter of 2006, fifteen months after it appeared? Might as well work on a notice for that groundbreaking Brokeback Mountain. Even Flarf's sell-by date seems to have passed these days. We've moved on. That's one model of culture.

In the last few years, we've gotten sufficient material to start taking the measure of Ginsberg and Bishop and Berrigan. But do we really know yet whether Hart Crane is worth taking seriously (too Quietistic? Too bad a speller?). For that matter, do we yet understand Dickinson? Hoelderlin? Shakespeare? Another model of culture.

Kent Johnson works essentially in the rift between these models, a rift that tears at our poetry and at our larger culture. One mode of poetic practice accepts its cloistered position within the university even as another advocates the aggressive marketing strategies of celebrity culture. But the possibility of a living poetry depends on the existence of another space, one that speaks to a public beyond the academy in a tone outside the purely commercial. Johnson's spiritual compatriot Kierkegaard fatefully questioned, in the face of public Christianity's formidable apparatus, whether anyone could still be a Christian. Kent Johnson similarly explores whether any American could still be a poet, even as we are frequently reminded that more American poets publish than ever before. Both the brilliance and the ungainliness of this as-yet-too-unread collection testify to the pressure the question exerts.

Look, for instance, at the central "The New York School (or: I Grew Ever More Intense)." Johnson presents this poem as the sole example of its ornately ludicrous form, the "Mandrake." (This seemingly minor detail encapsulates much about Johnson's methods. He misidentifies the mandrake found, for instance, in John Donne's song with the American mandrake, the mayapple, a plant used as a purgative by Native Americans. The false friends created by colonization here conceal an herb that heals by sickening: LPAA in a nutshell.) "The New York School" juxtaposes unusual grooming applications of several prominent poets of the first and second generation New York schools with scenes of carnage from locales real and invented, from Nokaido to the Hudson River. The poem inherits the earlier poets' investment in dailiness, their dizzying clusters of proper names and love of gossip:

The smell of baseball, synesthesia, and Ron Padgett's funny, tiny feet bound in purple silk spun by worms grown in trailer truck laboratories furnished by U.S. government Programs for the Arts made an overdetermined smell like (for these are the smells which the pleasures of peace provide) the smell I smelled in Leningrad in 1989 when, wedged between Barrett Watten and Ron Silliman, I entered the closet-sized cloister of a Shinto temple to look at the mummified middle finger of the Russian saint Nishiwacki Junzaburo under glass.

At the same time, it destabilizes the sense of historical and physical location that gives the New York School its name. What seems like medieval Japan becomes the Congo, September 11 bleeds into Nagasaki, until the ritual ablutions of the anonymous speaker appear to take place against an infernal backdrop of universal war. So is Johnson's poem a rebuke to the likes of Frank O'Hara and Ted Berrigan, one-upmanship masquerading as an antiwar statement? The reminder in the passage quoted above of the covert connections between the CIA's Congress for Cultural Freedom and the mid-century rise of Abstract Expressionism might insist on the political usefulness of the most overtly apolitical art. But the target seems more explicitly an uncritical celebration of any poets or poetry, reducing it to mere fashion accoutrement. Eliot's translator Nishiwaki Junzaburo potentially flips all of us off, Kent Johnson included, for putting too much or too little faith in the aesthetic.

So what war are these submissions to, anyway?

The answer's obvious. And LPAA's harrowing, lunatic tone of extreme violence, its crispy girls and light-tube-raped Ramals, juxtaposed with domestic scenes and po-biz fretting seems as perfectly suited to our current foreign adventure as the more earnest diatribes of Lowell or Levertov seemed to Vietnam. The earlier war was the last hurrah of a different public culture, one in which distinctions between the likes of Walter Cronkite and Glenn Beck made sense. The war in Iraq, even as it becomes wrenchingly clear that the real bloodbath most likely lies in wait, haunts the corners of our collective consciousness, only occasionally breaking into episodes of The View, and even then to the soothing tones of James Baker. This is the sort of war for which our country, as Johnson well knows, quietly prepped during the barely registered proxy fights of the 1980s.

But the answer's not so obvious. The obfuscations of liberal consensus culture, reaching their apotheosis during Vietnam, led directly to the language poetry that LPAA targets, in the person of Charles Bernstein, in its afterword. Perhaps most explicitly in the work of Bruce Andrews and Barrett Watten, language poetry drew much of its impetus from the readily apparent debasement of meaning in the public pronouncements of a MacNamara or Kissinger. But it's important to remember that the target was simultaneously the "hegemonic" breath-based poetics of Olson and the Projectivist School; Robert Grenier's iconic "I HATE SPEECH" (cited by Johnson) may be read simultaneously as an attack on Olson and an expression of disgust with the atmosphere of official lies. Johnson has, that is to say, a notable precedent in his conflation of poetic infighting with the deadlier kind. The collection's clearest ostensible commitment may be to a renewed confrontation with the Real, employing both the hoarsely impassioned voice of the poet and the dispassionately displayed bodies of war victims. But to the extent that that war coexists with a multifarious culture war, directed both at the mainstream culture of unknowing that masks the hideous costs of consumer life as we know it and at older forms of opposition seen now as accretions blocking the possibility of genuine resistance, LPAA's ambitions can seem at once outsized and outdated. Is it really out to be what we talk about when we talk about the avant garde?

A frequent retort is that the book is merely a provocation, a stunt. (Ron Silliman: "It may be a remarkably polished tantrum, but it's a tantrum nonetheless.") This retort of course puts Johnson in the happy company of Marcel Duchamp and Andy Kaufman. Although detractors of the huffily unamused Margaret Dumont sort underwrite the anarchic power of the poetry, the ultimate shallowness of the gesture threatens to obscure the more fundamentally disturbing aspects of Johnson's writing. Johnson's admiration for Fernando Pessoa is well-known, the Pessoa who (in his "own" voice) declared himself:

Completely crazy just from feeling,
Completely disfigured from scraping against things,
My mouth cut up from biting on things,
My fingernails bloody from clawing at things ("Time's Passage," trans. R. Zenith)

Pessoan questions about authenticity, authorship, and identity most saliently surround Johnson's earlier involvement with the Yasusada corpus. But LPAA also takes on as a central task the creation of a mask called "Kent Johnson," the insistent I which masochistically elbows its way onto the stage in the prefatory note to "Campus Watch" ("my god, how I am completely talking about myself").

"Johnson" essentially offers himself up as a sacrificial, genially monstrous representative of American poetry, full of good intentions, not unaware of the world's suffering, but myopically incapable of allowing these to distract more than momentarily from the pleasures and grievances lying closer to hand. Johnson the artist is most in control when his garrulous "Johnson" is least, as in "When I First Read Ange Mlinko." "Ange Mlinko" meditates on Johnson's discovering Mlinko's work in an issue of The Poker, an issue (#2) which also contains a portfolio of work by Iraqi poets, though Johnson leaves this unmentioned. The speaker's initial enthusiasm for Mlinko's poems, an enthusiasm which the poem never retracts, is interrupted by his learning of the incineration of four girls somewhere in what we still call the third world:

and never thought about again, by you or anyone.

In my experience, the primary effect of the poem, surrounding this elemental declaration by various self-conscious worries and qualifications, is to create an oscillation between a direct appreciation of the fact brutally recorded in these lines and a hyper-awareness of the layers of consciousness separating both reader and writer from this fact. The poem closes with Johnson, his reading finished, tossing a match on "fuel-soaked/briquets." The gesture at once underscores his indirect complicity in the murder his poem recordsit is ultimately to secure that fuel for his briquets that the pilotless drone patrols its Eastern territoryand suggests that Johnson offers the poem in part as more ammunition for his critics. Of course the poem can be, and has been, read as a slam on a gifted young poet for the crime of not writing what Kent Johnson wants her to. To read it this way, though, is to miss the obvious abjection with which Johnson himself represents his inability to represent, the speed at which the wounded world recedes from his own comfortable viewpoint. The killing match at the poem's close can also shed light: poetic clashes leave behind not charred bodies but, with luck, renewed insight. In the end, then, Johnson's poetic provocations are aimed especially at those whose instinct is to dismiss them as "mere" provocations, a habit of mind that works to foreclose uncomfortable questions about the physical and psychic violence that lies beneath contemporary American identities. And the poems demonstrate again and again that this complacent target is most readily available as an aspect of the poet himself.

This instinct for self-critique is put to use most jarringly in the title poem. "Lyric Poetry After Auschwitz" is in its own way as monumental a statement against our current foreign policy as was in Ginsberg's "Wichita Vortex Sutra" or Notley's "White Phosphorus." The poem's secret lies in its identifications, in its literally taking on the voices of its all-American torturers. The emptiness at the heart of these yearbook enumerations and dead-ender creeds, coming to life only in the precise depiction of the acts about to take place, renders Guantanamo and Abu Ghraib recognizable stops on the road occupied by Wal-Mart, Jerry Springer, and talk radio: the exhausted imagination juicing itself on its own brutality. The poem concludes with Johnson's taking on the voice of an American poet, and again it depends for its viability on the voice being in part that of Johnson, or "Johnson,", confessing his own utter inadequacy. "Well, we did our best; sorry we couldn't have done better. . ." Imagine those lines echoing from Hiroshima to the fall of Saigon, from Santiago to Tehran to Mogadishu to Sadr City. Then you'll know who the last line addresses. Poetry may not be able, even or especially in a democracy, to make much happen, but in the face of wars within and without, it can at least avoid turning its head. In service of this effort, with all his elaborate buffoonery and waspish pranks, Kent Johnson is the gadfly we deserve and need.