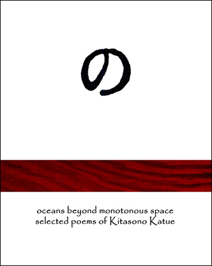 Kitasono Katue was one of the most important Japanese Avant Garde poets of the 20th Century. Due to circumstances ranging from language barriers and lack of translators to stereotypes to misfortunes in publication, his work is not widely known outside Japan. Ezra Pound considered him one of the great poets of the century, and the two corresponded and influenced each other for decades. Kenneth Rexroth believed Kitasono was the best of Japan's Avant Gardists, and as John Solt puts it, Rexroth "kick-started" Solt's translation of Kitasono by urging Solt, one of his most trusted students, to translate him. Robert Creeley had previously published a small volume of Kitasono's poems through his Divers Press, and considered it and Charles Olson's Mayan Lettersthe most important of the work he published. Kenneth Patchen also saw him as a major figure. Yet however important he was to these poets, even those who published him, his work remained largely unknown outside small circles in the English-speaking world. A significant selection of Solt's translations, Glass Beret got little circulation, in part due to the death of publisher Ed Burton shortly after the book came out. Solt's study of Kitasono, Shredding the Tapestry of Meaning, published by Harvard University's Asia Studies Center, has done well enough to make Kitasono somewhat better known outside Japan, and has received the recent honor of being translated into Japanese. With luck, this edition of Solt's translations will generate a wider readership for Kitasono.

The publication of the book and this issue Big Bridge may provide a unique opportunity to gather first responses to a major and largely unknown poet outside his own country. The first review of the book written was produced by the indefatigable Anny Ballardini. She wrote the review in part as fulfillment of a degree program, and in part to publish on the web. The first published review was by Aysegül Tözeren. Her review consisted of a brief introduction and an extremely sagaciously chosen passage from an interview with Kitasono which appears in the book. Ms. Tözeren translated her introduction from Turkish for us, and for the rest we simply reproduced the English translation from which she worked. The third review, by Susan Smith Nash, was published as part of her work in setting up on-line teaching programs.

Whether this book is the milestone it's editors think it or not, the current project provides a snap-shot of how criticism and commentary on major work begins and how it functions and grows at this time. This suggests paradigm shifts from previous literary periods, and seems felicitous in relation to a poet so thoroughly ahead of his time as Kitasono. It seems noteworthy, for instance, that the first three reviewers were women, and were not asked to review the book. Ms. Ballardini lives in Italy; Ms. Tözeren, in Turkey; Ms. Nash has her home base in Oklahoma, but is a dedicated traveler and internationalist, who has done impeccable work in translating and promoting the work of poets, particularly women, living in other countries and often ignored by the mainstream. None of the first responses come from specialists in Japanese literature. Ms. Tözeren, in fact, makes her living as a medical doctor, and balances this with her work as a poet. All three are in different ways at the leading edges of poetry in their respective environments, however, and it seems important that these women who have consistently been ahead of curves in international poetry should be the book's first reviewers. The next three reviewers have also proved perspicacious in their advocacies and interests. Some of the participants have taken part in the translation project Kitasono Katue and the Colors of the World's Words, and all, including Carlos M. Luis, whose contribution is in Spanish, would like to see Kitasono as a global poet, not simply as a Japanese poet whose selected poems have been translated into English.

Karl Young. the co-editor and author of the introduction of the book and co-editor of this page, began publishing reviews of books by multiple reviewers in the 1970s to get away from what he saw as the falsification of poetry by single-perspective criticism. (See his comments on this in Margins at Big Bridge.) He sees the current project as a continuation of this effort. In this instance, readers get the beginnings of a chronology of responses to a specific book. We think it important that none of the contributors was aware of Kitasono before the book's publication, and that their responses come without any influence from previous commentators.

Mr. Solt and Mr. Young placed the following quote from Kitasono on the last page of the book: "My poetry is so simple that only specialists seem to understand it." The present group of first responders seem to give this more depth than Kitasono, Solt, or Young may have originally understood themselves. If the work can't be read in the Italian Alps, Istanbul, or Norman, Oklahoma with significant appreciation assisted by no more than the introduction, perhaps Kitasono's poetry should remain in Japanese. That these first commentators from widely different backgrounds found plenty to say about Kitasono, and weren't too shy to say it, suggests how profoundly vital Kitasono is for a global audience. We hope other 20th Century Japanese poets will find translators and publishers outside Japan in this century, even if the rest of the world missed them in the last, and that Japanese poets of the current century will not have to wait as long for the audience they deserve. Specialists in Japanese literature will join in the comments on Kitasono, but it seems appropriate that poets without preconceptions and with artistic attitudes and practices similar to Kitasono's should have the first, if not the definitive, word on this book.